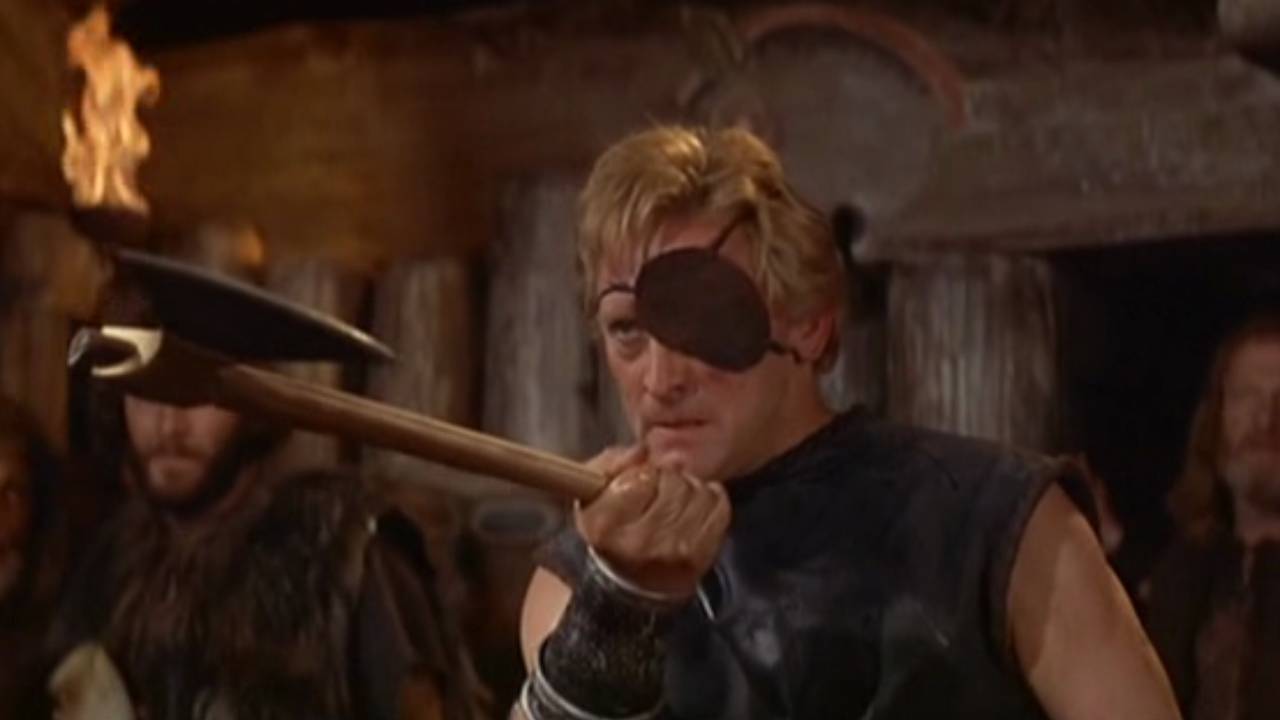 1958’s The Vikings is a mead-infused action epic starring Kirk Douglas as one eyed, axe wielding Norseman Einar. We know first hand just how well a libation washes down an afternoon’s axe throwing but what is about to follow illustrates why for safety (and accuracy) reasons just a little tipple is our overriding mantra.

As a silver-screen swashbuckling rollercoaster ride, The Vikings has all the bells and whistles. Revenge, betrayal, duels for the love of a fair maiden, it’s got it all. But why we love it so much is, of course, because of some badass axe-play, and one of the weirdest, and troubling, throwing axe contests of all time.

In fact, it’s not technically a contest at all, more of a bizarre mash-up of the William Tell legend and the witch trials of the 16th century. For those who haven’t heard of him, William Tell is Switzerland’s only folk legend to have made it to the world’s unofficial heroes hall of fame.

The story goes that when he refused to show deference to a tyrannical ruler, Tell and his young son were sentenced to death. But Tell was a legendary marksman and this evil lord wanted a show so he offered the would-be hero a choice. If he could shoot an apple off the top of his son’s head from twenty paces, they could both go free. I’m sure you’ve worked out the rest of the tale; Tell proceeded to perform one of the most badass instances of marksmanship and went off on his merry way in true Robin Hood style towards fame and fortune.

Now back to the Viking long hall and a scene of utter debauchery. Here we see a woman being placed in a huge timber stockade and her three blonde braids extended and pinned about her. Her useless drunken husband has accused her of adultery and to discover the truth he has three attempts to throw an axe and cut one of the braids. Messed up right?

He spends his first two throws like a millionaire spends his pennies, carelessly. At this point we find out one slightly redeeming caveat to this barbaric challenge: if he misses all three shots then his wife is proven innocent and he is drowned in the sea.

As the drunken viking desperately waves his final axe, Kirk dashes across the hall and snatches it off him. Without a moment’s hesitation he throws it cool as cucumber and severs a golden braid, freeing the hapless maiden and showing the altruistic power a true axeman can wield.

Now, whilst we do not advocate such spectacles ourselves, we do provide all the necessary facilities for you to come and hone your axe throwing right here in London. Just in case you need to come to the aid of the needy in a viking drinking hall. Could happen right?

There is also another scene where Kirk Douglas uses thrown axes as a staircase to breach a castle wall… but we’ve already spoiled enough of this movie for you!